Joe- Welcome to the site Brian! Without sounding like too much of a fanboy I have to say that for me, as a fan of the comics as a kid and now a collector of the art as an adult, you really were the heart and soul of Marvel UK’s Real Ghostbusters! I’m not sure anyone else was even remotely close to contributing as much artwork as you did over the years, was it your main title while working for Marvel UK at that time?

Brian- Hi Joe, yes indeed it was, though I filled in on other titles occasionally, and did bits and pieces for annuals and such. I drew Inspector Gadget, Duckula, Zombears, Duffy’s Place, inked some Thundercats, and wrote a prose story for a Marvel annual featuring the Avengers and Rick Jones. Later on I co-created Shadow Riders, with John Freeman, who also gave me my first Doctor Who strip, “The Man In The Ion Mask”, featuring the 3rd Doc, which appeared in the Unit Special. But it was mainly Ghostbusters. I should have had my own uniform!

Joe- I very much agree! We need to get you a GB name badge! I understand you drew the original full page promotional advert for the RGB comic which was used in to promote the comic in various other Marvel titles. You recently stated that it may well have been your first 10 panel page, is that correct? How old were you when you began working on the comics and what previous experience did you have up until that point as an artist/illustrator?

Brian- Professionally I was a late starter, having spent 5 years at art school, a couple of years unemployed and 18 months as a ‘Graphics Worker” for a local government agency. I was about 25 when I started on Ghostbusters, though I’d done a couple of freelance strips for DC Thomson (The Numbskulls and Desperate Dan. 🙂 ) That 10 panel page was one of the first things I drew for Marvel UK. 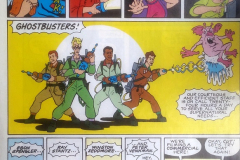 Joe- Researching for this interview I couldn’t help but notice the incredible amount of work you contributed to the title. In fact, the first 50 or 60 issues of the Real Ghostbusters comic was pretty much just you and your pencil wasn’t it? Haha!

Brian- From my workload it might have seemed so, but actually a lot of people contributed! Andy Lanning, Ant Williams, Phil Elliot – even people like Steve Parkhouse chipped in.

Selection of Brian’s cover artwork from some of the titles earliest issues: 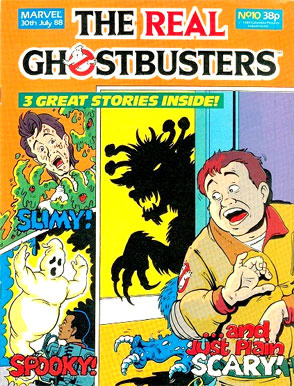 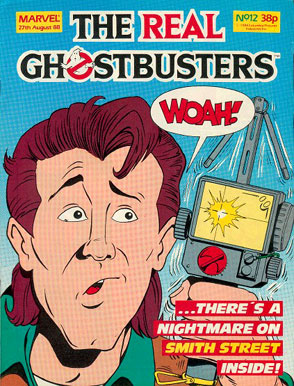 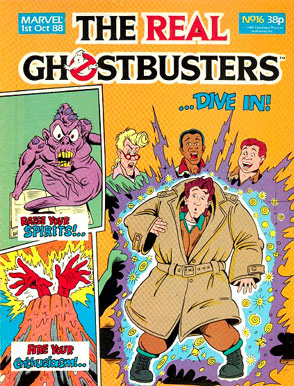 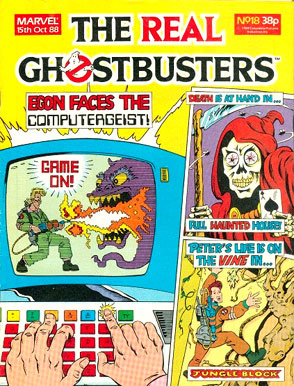 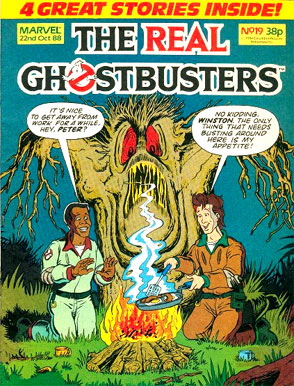 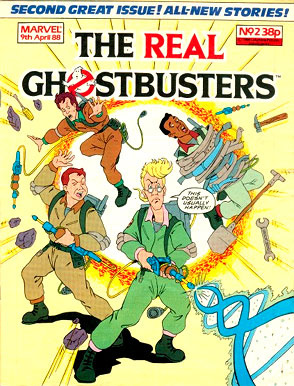 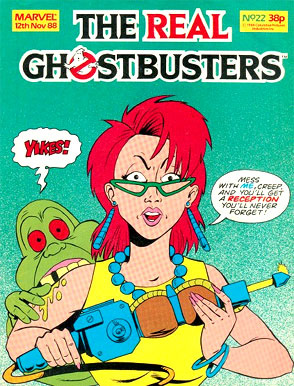 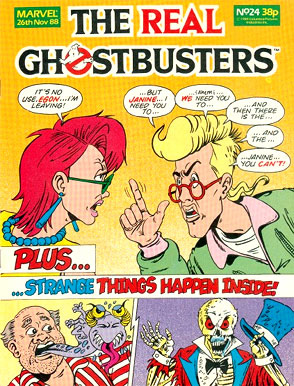 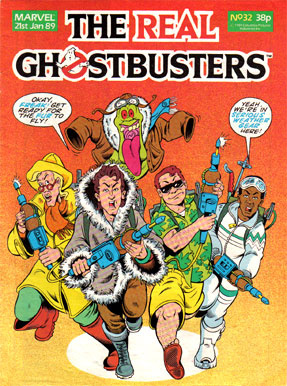 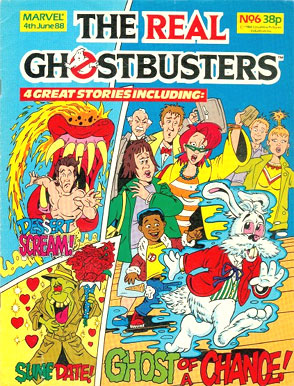 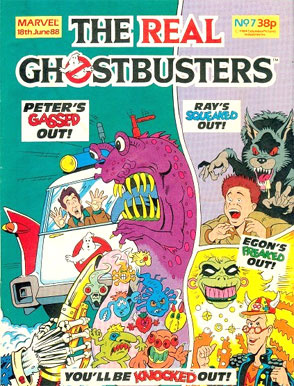 Joe- In issue #35 I think I’m right in saying that you not only drew the cover but you also pencilled all three of the stories, does that sound about right? I think that may well be the only issue where there was only one artist credited for everything. They really should have called it “Brian Williamson’s Real Ghostbusters” at that point!

Brian- Is that right? It’s certainly a snappy title! 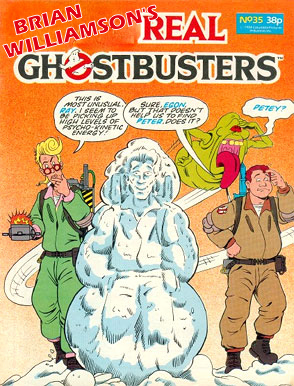 Joe- Given your incredible contributions to the title going back as far as the very first issue, I think it was only fitting that you got to draw the anniversary cover for issue #100. Did you (or anyone else involved) ever think that it would last as long as it did and how did you celebrate the 100th issue? 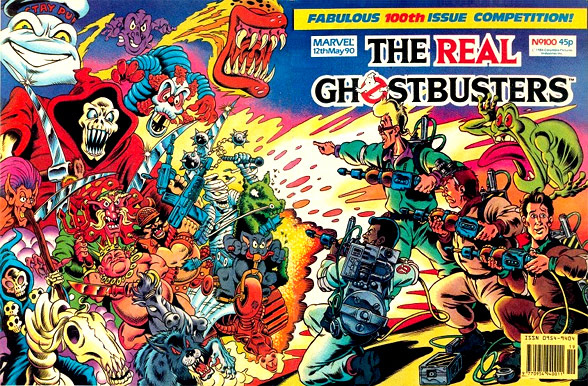 Brian- I think I probably celebrated by moving on to the next deadline! They were pretty relentless. Stuart Bartlett, the editor at the time, snarfed the cover art for that issue from memory.

I don’t think anyone involved thought the title would last nearly as long. I think a lot of the longevity was down to the writing, with Dan Abnett and Steve White contributing a lot to the ‘ethos” with things like “Spengler’s Spirit guide”. Steve and I can have entire conversations consisting of movie quotes.

Joe- On your cover of issue #118 we saw the classic Hollywood Monsters: Dracula, Frankenstein, Werewolf and the Mummy Monster which I believe was the comics first nod to Kenner’s toy line. How much of an impact did the toys have on the comics? I know there were various toy inspired covers that followed. 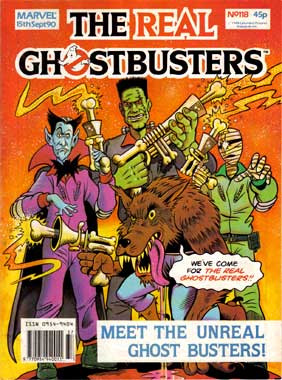 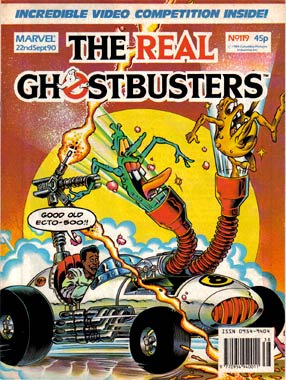 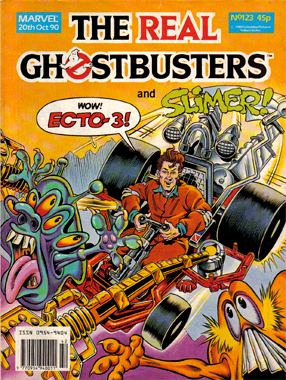 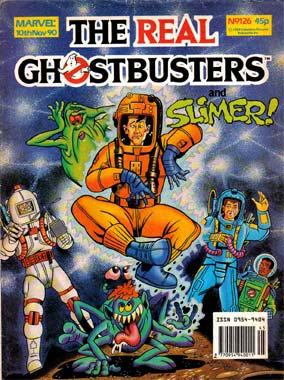 Brian- The first I knew of the Kenner stuff was when a bunch of the toys turned up in the mail. We were sent quite a few, the Marvel UK offices were awash with them!

To be honest my first reaction (other than “Yay! Toys!”) was to hope that they weren’t going to be a regular thing. The strip was pretty heavy on reference material already, things like the Firestation, the GB logo, the backpack, the proton guns, the ghost traps, and Ecto-1 all had to be properly depicted and the detail was quite time consuming. I actually stole an idea from Andy Lanning early on when, sick of having to draw the whole frontage of GBHQ, every time there was an establishing shot, he just zoomed into the sign. Genius!

Joe- Issue #121 saw the title of the comic change from the Real Ghostbusters to “The Real Ghostbusters and Slimer” (now with “even more Slime!”) but only for about ten issues or so. What did you think about the main focus of the franchise shifting from the GB team to Slimer? A change that many believe was the beginning of the end for the animated show. 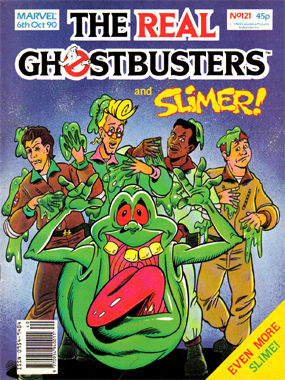 Brian- It was the beginning of the end for the comic too, because, although Slimer was insanely popular, he was a bit of a one-note character (two note, I guess – eat stuff, slime stuff 🙂 ). Once he became more prominent the interaction between the other characters was lost.

The weird thing about Slimer is that, at the beginning I was given the animators model sheets, and Slimer had several different looks, from cute to more monsterish. I based my version on one pose (pear-shaped with a giant mouth) and kind of stuck with that, and that sort of accidentally became his look in the comics – but it could easily have gone another way.

Joe- You must have come into contact with many of the other artists, writers and editors of the RBG comic during your time working for Marvel. Who were some of your favourite people to be around and why?

Brian- When I moved to London, I shared a studio with Andy Lanning, Anthony Williams, JohnTomlinson and Kev Hopgood. Doug Braithewaite and Steve White joined later. I wasn’t really used to being around people who had the same sense of humour, and frames of reference, as me, it was great fun. I definitely had to get the Tippex out more than a few times while working due to someone making me spurt my drink from laughing straight onto my pages.

Joe- Which of your fellow UK artists did you look up to back then?

Brian- Like many people, I sometimes suffer from “Imposter Syndrome” – that feeling you get when you’re around talented people and you just think, “What am I doing here -I’m going to be found out!” I looked up to pretty much everyone, and tried to learn what I could. Not that I’d tell them that, obviously.

Joe- Who do you think inked/coloured your pencils the best over the years?

Brian- John M Burns did wonders on the cover colours, and Bambos was great on the inks. He was always very faithful to the pencils, which meant, of course, that if a mistake made it through it was down to my pencilling!

Joe- On that note, were there ever any moments where, upon seeing the finished article you were unhappy or disappointed with any inking or colouring?

Brian- Not really, though I was disappointed with my pencilling often enough.

Joe- As a loyal childhood subscriber, your covers are instantly recognisable to me and seeing each one gives me a huge dose of nostalgia. I can honestly say I remember each and every one! While I was doing some researching for this interview I began counting how many covers you had done because although I knew you were responsible for quite a few, I didn’t know exactly how many. I have to say was shocked when I got to 50 and by the time I got to 80 I actually gave up counting! Were you the go to guy for RGB cover art?

Brian- It seemed like it, but the mysteries of what goes on in editorial is above my security clearance 😉

Joe- Did you work on many of the later issues?

Joe- When comic fans in their 30’s approach you at conventions and other similar events do they ever mention your Real Ghostbusters work and what is their reaction to meeting you if they do?

Brian- I was at a TORCHWOOD signing at FP a couple of years ago and a guy brought about thirty issues to sign. People I meet at these things are always (well 99.9% of the time) great – just enthusiastic and friendly.

Joe- What are your fondest memories of working on the title?

Brian- Mainly the great people I got to work with, and the joy of actually being paid for working at a job I’d wanted to do since I was about six years old. I think my parents had pretty much given up on me by that point.

Joe- If you could do it all again would you have changed much or are you pretty happy with how everything you drew turned out?

Brian- I probably wouldn’t change much, that said I’m never really happy with anything for more than five minutes. That’s why deadlines are good; they tell you when to stop. 🙂

Joe- Brian, thanks so much for your time and for sharing your RGB memories with us!